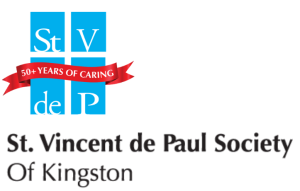 The History of
St. Vincent de Paul of Kingston

In the early 1870’s, the St. Vincent de Paul Society was incorporated in Kingston, Ontario. But the story of 85 Stephen Street begins in 1965 when the Society began to formalize their care for those in need through St. Mary’s Cathedral. By 1966, other local parishes joined in the effort of the society to care for the vulnerable in this community and were providing support to those in need and those who were in jail.

In 1967-68, under the leadership of Arch Bishop Wilhelm, the property at 85 Stephen St. was purchased. With the tireless support of Father William Burns and local parishioners, including Pat Deasey, John McLean, and Don Mocktiche, care for those in need could now include free clothing and furniture. At that time, St. Vincent de Paul Society had only the Warehouse to provide services from.

It was not until the mid-1970’s that a hot meal was provided for those living in poverty. Sister Loretta McAndrews, who was the 1st Manager of the Society, began this ministry with the purchase of the small building referred to as the “Bug House” as it was once a small extermination business that used the space. Later, a new kitchen was created to accommodate the increasing number of individuals who were in need of a hot meal and a place to belong. The community that exists here today among the clients, volunteers and staff is rooted in the tender care provided by Sister Loretta. Her dedication to this program inspired the naming of our front building – The Loretta Hospitality Centre.

Today, we still offer a hot meal at lunchtime, five days a week, all year long. The WearHouse still operates offering free household items and clothing to those who visit our facility. We also offer an Emergency Food Pantry to assist our neighbours who are running short and find themselves without enough food.

We work very hard to maintain the quality of service that our founders and early supporters aimed to provide. We stay close to our roots and offer kindness and compassion to all whom cross the threshold at 85 Stephen St.

Ready to Make a Difference?

Providing Support to Individuals in Kingston

WearHouse:
Monday to Friday 9 am-1 pm